After more than 20 years of putting up with a large verruca on my left heel, I had given up all hope of ever finding a cure. It initially became established following a course of chemotherapy treatment for Hodgkin’s Disease when I was aged 21 when my immune system was low. I had tried many treatments and visited several podiatrists but it proved very stubborn and refused to go away.

By coincidence, Jennifer recently started working at our clinic where I am based as a Physiotherapist, and she took this on as a challenge! I then embarked on a course of laser treatment which I admit, was painful at times.

However, I’m delighted to say that after only 4 sessions of laser my verruca has completely disappeared! I can now wear open backed shoes without embarrassment for the first time in years and I have no hesitation in recommending this treatment to anyone who wants to be wart free. 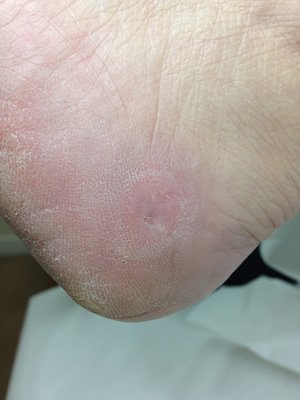